“Circling the Earth in my orbital spaceship I marveled at the beauty of our planet. People of the world, let us safeguard and enhance this beauty — not destroy it!”
Yuri Gagarin

Humans have achieved a lot in the last few millennia. The mighty Ancient Egyptians constructed the pyramids. The Chinese invented (and Gutenberg popularized) the printing press. Obama actually managed to pass a health care reform bill in the US.

But few feats match the challenge of sending human beings off our planet and into space. The first human in the rarefied class of “spacegoer” was Yuri Gargarin, the Soviet cosmonaut who on April 12, 1961 traveled into space and orbited our planet aboard the Vostok 1.

And for the first time, Winnipeg is joining in a worldwide party to celebrate this human achievement. On Yuri’s Night, “people from all over the world come together to celebrate humankind’s first flight into space and shape our future as a species.”

Who exactly is bringing “The World Space Party” to Winnipeg? Quite unsurprisingly, Eve “DJ Beekeeni/Vav Jungle” Rice and some of her friends, including the Shake (DJs Lotek and Manalogue), DJ Cyclist and DJ King Kobra.

Return to the science education haunt of your youth, the Planetarium, now licensed for the occasion (i.e. this time you’ll be drinking something stronger than a juice box). Wear a space-themed costume. Check out a science exhibit or video installation. Dance your ass into outer space.

“Winnipeg is now charted on the interplanetary map as ‘The Dance Capital of the Milky Way,” says Rice. Make it happen, astronauts!

No doubt Mat Klachefsky and the rest of Boats are having a time at SXSW right now. (Can you smell my jealousy, even despite this above zero weather?) And no doubt the band is playing a boatload of new songs from the upcoming album Cannonballs, Cannonballs. And though we don’t have barbecues accompanied by bands from all over the world, Klachefsky and gang have three new songs up on their MySpace. Klachefsky’s singing in his trademark falsetto on the indie ballad “Smokestack & Lucy’s Magnificent Cabaret” and “Drinking the Lake” is a happy, sunny afternoon kind of track.

And after Boats tour their way back to Winnipeg, they will be releasing Cannonballs, Cannonballs on May 1 at the West End Cultural Centre.

THE BESNARD LAKES
Are the Roaring Night 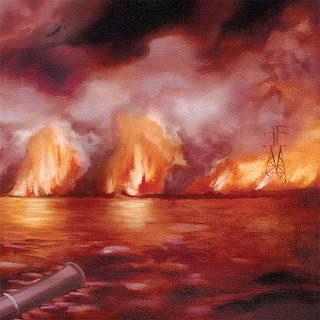 Three years was maybe a little too long for one of Montreal’s grandest rock bands to follow up their magnificent Are the Dark Horse, but Are the Roaring Night still has all of the touchstones that made the Besnard Lakes’ last album stand out—dreamy harmonies, My Bloody Valentinesque vocals, catchy choruses, and mind-blowing walls of sound. The core of the band is guitarist Jace Lasek and bassist Olga Goreas, a married couple who supply all of the wonderfully interweaving melodies. They own a recording studio in Montreal, and no doubt they’ve used the studio as integral part of Are the Roaring Night. There’s the constant harmonic feedback in “And This is What we Call Progress;” the soundscapes that are “Like The Ocean, Like The Innocent Pt. 1” and “Land of Living Skies Pt. 1;” and the pristine reverb of “Light Up The Night.” Because of its front and centre vocals, and its thundering conclusion, the lead single “Albatross” is a standout track, but only one of few. However, taken as a whole, Are the Roaring Night is a platter of sounds for your ears, because that’s what the Besnard Lakes designed with in mind. (Jagjaguwar, www.jagjaguwar.com) Taylor Benjamin Burgess

She’s the oft-misunderstood, oft-hyperbolized neo-folk darling who defies categorization due to her unconventional instrumentation (harp), more unconventional voice (squeaky) and still more unconventional disregard for standard pop/rock song structure and subject matter. Her first album, The Milk-Eyed Mender, was a compendium of short songs about yarn, seashells, devotion, regret, and imagination. Her second album, Ys, was a five-song collection where the shortest track clocked in at 7:17 and the longest at 16:53, each of them reveling in a rich orchestral background produced by Townes Van Zandt, each of them long enough to fully develop Newsom’s poetic ideas, against a landscape of leafless trees, talking circus animals, and astronomy lessons.

END_OF_DOCUMENT_TOKEN_TO_BE_REPLACED

MOLINA AND JOHNSON
Molina and Johnson

Collaborations like this always sound good in theory. Both great artists in their own right—Will Johnson, the largely unsung helmsman of Centro-Matic and South San Gabriel, and Jason Molina, the well-seasoned songwriter behind Songs: Ohia and Magnolia Electric Co.—Molina and Johnson should be an exercise in one-upmanship, a chance to push and be pushed. There are some worthy songs here and it’s hard not be intrigued with such a beautiful album cover. But apart from Johnson’s wistful “All Gone, All Gone” with Sarah Jaffe, the death-rattle duet of “Now, Divide,” and the duo’s most developed effort, “Almost Let You In,” the album is chock full of old fashioned molasses. Especially after the half-way point, it takes real effort to stay interested in the fractured piano/guitar template and the particularly unmemorable solos of  “Lenore’s Lullaby” and “Each Star Marks A Day.” If Molina and Johnson took the time to explore some of the differences and dynamics between their respective approaches, this could have been an interesting record. Instead, echoing Johnson’s words, it sounds like these boys are “just passing through.” (Secretly Canadian, www.secretlycanadian.com) Jonathan Dyck

Jets Overhead are a band that would have fit in perfectly in the mid-1990s. Their sound, very much influenced by the Verve and Radiohead circa The Bends, was seemingly tailor-made to be included in film and television from around that time. That is not to say that they are a bad band; not by a long shot. Their sophomore album continues in the same direction—guitar-driven alternative rock that has an ethereal, dreamlike quality to it. Each track on the album has something that makes it stand out from the rest of the album. There is not one song on this album that could be classed as filler. Adam Kittredge’s vocals give the album a melancholy vibe. Jets Overhead are able to pay respect to their influences from past decades, while still making an original album that is relevant and enjoyable to today’s crop of listeners. Key tracks include “Heading for Nowhere,” “I Should Be Born” and “It’s a Funny Thing.” (Vapor Records, www.vaporrecords.com) Charles Lefebvre

It’s a long way around the world. When indie pop outfit An Horse pulled into Winnipeg in September, 2009, Kate Cooper and Damon Cox were more than a little run-down-looking, a little weary—offstage. Onstage, of course, the guitar-drums duo were impeccable and compelling, both in the UW quad and, I’m told, at the Lo Pub the same evening. Touring solidly this past year in support of their critically acclaimed debut full-length, Rearrange Beds, the pair are about to take a hiatus to write a new record. “We’ve nearly finished the cycle of the record we’re on,” said lead vocalist and guitarist Cooper.

The cycle has taken them from their home of Brisbane, Australia to the bright lights of New York City and The Late Show with David Letterman. It’s taken them to Europe and on tour with Silversun Pickups, Death Cab for Cutie, and Canada’s own Tegan and Sara. “They’re fun, great fun, good friends of ours and very supportive of us,” Cooper said of the Quin sisters. “They’ve worked really hard to be where they are and they’re very authentic.”

Authentic is a word you could use to describe An Horse’s beginnings. Cooper and Cox were co-workers at the last indie record store in Queensland. They were playing in other bands, but as Cooper says, started “mucking around” and found a chemistry between them that worked. “It wasn’t intentional,” Cox said.

The store where they worked has now closed, largely because, Cooper says, “People don’t buy CDs anymore.” An Horse aren’t digital haters; “Digital music’s cool, if people buy it,” she said. But there’s a dark flip side to that. “More people have stolen our record than bought it,” she said, and Cox had the anecdote to illustrate. “Someone had registered a website with Kate’s name, put up our photos and our record to download for free. It was one of those websites where you have to do a survey or something. So someone was getting money somehow. It was really shit and disappointing. We fucking worked really hard on that record,” he said. And the insults don’t stop there. “We’ve had people at shows come up to us and say, ‘You guys are fucking great! Hmm, this is your album. I’m not going to buy it, I’m going to go home and download it for free.’”

Disheartening words for people trying to make a living playing music, but An Horse seems less angry and more frustrated when it comes to piracy. “They don’t realize it’s not cool,” Cooper said.

An Horse might be a bit down, but they’ll be back in the saddle soon—they’re currently on tour with Tegan and Sara (including a January stop in Winnipeg). Their songs have appeared on TV shows like Friday Night Lights and One Tree Hill. Big things are ahead for these two individuals who are passionate about music and making it, in the basement of a record store or on an arena stage. As for the name? Cooper said it originated with a grammatical inside-joke sweater, about the usage rules for words that start with “H” and the indefinite article. Could “An horse” really be correct? “It’s a grey area,” she said, with a shrug.

One of the most indie/electro-tastic artists coming to Winnipeg in the next couple months has to be Portland’s Yacht. Jona Bechtolt and Claire L. Evans normally prance around in front of a screen energetically, but for this tour, they’ve recruited a touring band, to look just a little less ridiculous. But all of the seriousness goes out the window when the band’s name is “the Straight Gaze.” I lol’d at that one for a while.

The band is made up of Portlanders Rob Kieswetter of Bobby Birdman (who is opening it up when Yacht plays here), Jeff Brodsky of Jeffrey Jerusalem, D. Reuben Snyder of Rob Walmart. Check out this crazy tour video they made, just to get us all psyched up!

WHERE: Pyramid Cabaret
WHEN: February 25
TICKETS: $12 advance at Ticketmaster and Music Trader

Hey Winnipeggers, has this warm weather got you riled up? Nowhere to take yr aggression out on a Tuesday? Well don’t forget that the unparalleled cultural experience that is Tel Aviv’s  Monotonix will be playing at the Pyramid Cabaret tonight. The three-piece have been banned from most venues in their home country of Israel so they took to the road a couple years ago so us hedonistic North Americans can partake in their rampage.
Eh, whatever, just check out this video of them playing the Pyramid last year:

Winnipeg duo War Elephant will be opening up the early show (no srsly, the poster says doors at 8 p.m.) with their merciless crunch of bass/drum noise rock. Here’s a video of them jamming in Wigtads‘ space.

WHERE: Pyramid Cabaret
WHEN: TONIGHTTTTTTTT
TICKETS: $18 ahead at Soul Survivors and $20 at the door

Visit the West End Cultural Centre on Friday, January 22nd for a collaboration between a rocker (John K. Samson) a folker (Christine Fellows), a composer (Robert Honstein), a violinist (Cristina Zacharias), a percussionist (Ed Reifel) and a mastermind (Leanne Zacharias).

L. Zacharias, a cellist, curator and music prof (you might recall she appeared on C. Fellows’ brilliant latest album, Nevertheless), has spearheaded this event, called Arc: Six Musicians Map the Current, which is described as:

a musical conversation between these diverse musicians from different genres and backgrounds—a baroque violinist, a symphony percussionist, a contemporary composer, a cross-disciplinary classical cellist, and two popular songwriters—performing onstage as one ensemble.

The evening promises new repertoire from Honstein and new arrangements of songs by Samson and Fellows.