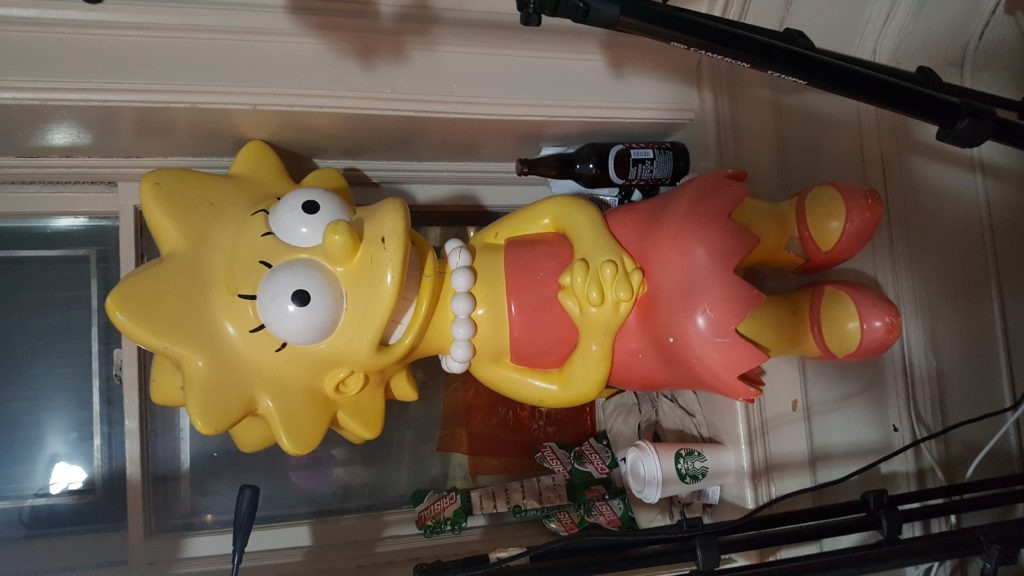 Visual art and music go hand in hand. From album covers and liner pages to visual displays at shows, to t-shirts and posters or tiny pins for sticking to things, the two are almost inseparable. The home of the Village Idiots is a testament to this.

Stylus took a Wednesday trip down to Osborne Village for The Proud Sons Live at The Roslyn broadcast and to take a look at some behind the scenes memorabilia. Some of these items you might have seen on the show before, but we’re here to tell you what they’re about. So with that, let’s take a little trip…

Picture two is an art piece that was made by the Village Idiots’ friends Mike Pratt and Sarah Sytnyk that is mounted above one of the couches in the living room of the apartment. “They walked along the riverside and they found this log they thought it was such a cool shape and everything,” says Saunders. “And they took it home and made it into this actual art piece as we see it.”

The third picture is a painting made by Sid Bellinger that sits atop the fireplace mantel in the living room. “I bought it from him a long time ago. He’s the guy who makes the mural for all Live at The Roslyns. So he’s done both murals. When we first moved in I bought that. And another really cool thing is all these CDs (on display beneath the painting) are CDs of all the bands that have played Live at The Roslyn” says Saunders. “We get an album when the bands have them and we put it there like it’s a throne to them.”

The fourth and fifth pictures are taken from fellow Village Idiot Kevin Repay’s bedroom. As Saunders explains: “Sid Bellinger as well made those. So this has never been seen before. Nobody is aware of this really unless you’re here. So the guy who made the mural is the guy who made these super cool things and Repay got the moon and sun. We just have to paint the walls white again,” whenever (if ever?) it is that they decide to leave.

Picture six shows one of the most unique pieces of artwork in the apartment. A glittering guitar that looks like it could have been recovered from some underwater shipwrecked fantasia deserves a keen eye to truly be appreciated, and the photo, due to the reflecting of light, does not exhibit its true visage. Nevertheless, like the other items already shown, you can see that it’s a truly remarkable piece. “We have a friend that, this is what she does, she repurposes guitars” says Repay, explaining that the guitar is two combined into one, overlapped, into something where artist Savannah Jensen created her own. “She does this as an art project and sells them,” says Repay. “People hire her to do this. She’s been hired four times since doing this one. And Brent Alarie (owner of Hwy 59 Guitars), donated guitars to her. Every one is unique obviously. Her art style is very much like collaged style, so they piece together guitars and it fits so well.”

Undoubtedly, with these artistic gems that are sprinkled throughout the Village Idiots apartment, it wouldn’t be the same without them.