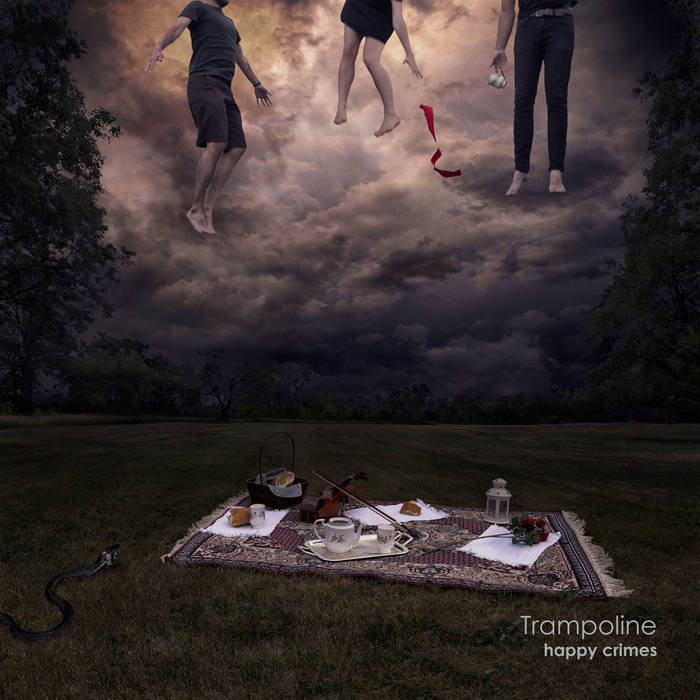 On February 9th, Winnipeg anti-rock band Trampoline released their latest musical enterprise, Happy Crimes, at the West End Cultural Centre. The album is a full-length rock musical that tells the story of a man who is tired of trying to make himself happy; who wants to be better, but doesn’t know how; who believes there is an imminent apocalypse, internal or otherwise, about to take place.

With punchy honesty and imaginative arrangements, Michelle Lecnik, Joey Penner, and Steve Martens follow the man’s journey as he discovers if he can “accept love and allow himself to feast on life’s harvest in spite of its perils.”

With bouncy quirkiness, Trampoline take on different genres, drawing from a variety of influences. The elements of musical theatre and rock fuse effortlessly on the track “Don’t You Want Love.” Opening with angular interplay between the guitar and bass and funky percussion fills, Michelle confronts the listener, asking “don’t you want somebody who wants to celebrate / everything you are on any given day?” The song spontaneously transitions to a heavy rock instrumental reminiscent of Weezer, before fading to a chant of the song title, which turns Queen’s “Somebody To Love” on it’s head. The contrast of the three sections gives the song a cinematic quality that is heard throughout the album.

Michelle’s provocative vocal delivery – comparable to Patti Smith or Fiona Apple – is tailored to suit the message of each song on Happy Crimes. From the intensity of “Mary Alice” to the sweetness of “Twins on Fire,” she is a singer who employs a wide range of vocal techniques to get her point across with sincerity. Michelle’s hope is “that the listener will resonate with the emotional charges embedded in the songs and, best case scenario, [the music] will awaken feelings that … have been dissociated.”

Trampoline will be taking this show on the road with a Canadian tour heading West this Spring and East this coming Fall.