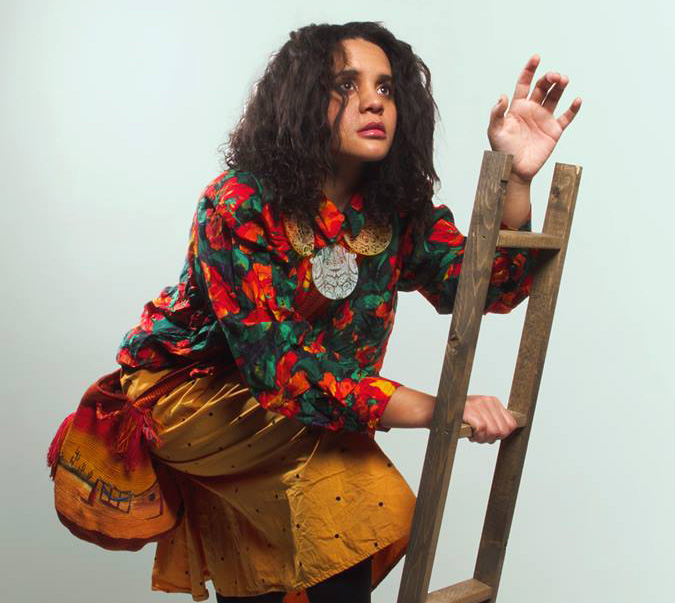 After her latest album, La Papessa, won the $50,000 2017 Polaris Music Prize, Colombian-Canadian singer-songwriter Lido Pimienta has been busy. While raising a young son as a single mother, Pimienta has been spending time developing her sound, her live performances, and her vocal presence on social issues.  She is a unique addition to the 2018 Winnipeg Jazz Festival line up as her music combines styles such as indigenous Afro-Colombian music with western electronica and synth pop. END_OF_DOCUMENT_TOKEN_TO_BE_REPLACED

At the Polaris Music Prize Gala on Monday night in downtown Toronto, Richard Trapunski, Editor-in-Chief at Chart Attack, presented Yamantaka // Sonic Titan’s album, UZU, by posing an important question. It’s one so simple and obvious that the fact it seems to never get asked is almost downright confusing. END_OF_DOCUMENT_TOKEN_TO_BE_REPLACED

This little split from Saskatoon’s Shooting Guns and Edmonton’s Krang is fucking tasty. Purveyors both of heady instrumental intensity, I’ve been digging on their respective recent releases to the point of mania lately, so to have them both on one slab of vinyl is a goddamn treat. END_OF_DOCUMENT_TOKEN_TO_BE_REPLACED

Hooray! It’s finally time for the music awards that we identify with—the Polaris Music Prize, awarding the Canadian and the creative.
About an hour ago at the Drake Hotel, the long list nominees were announced, and Twitter is already aflutter with who should have made the cut, and doling out congratulations to those who did make it. Of the nominees, Imaginary Cities is the only Winnipeg band to have made the cut, (No Alpha Couple? What a travesty!) and ex-Winnipeggers Neil Young and Luke Doucet are also on the list.
This excitement will last a good 20 days before the short list is announced on July 6, and then we’ll hold onto and bicker over those ten titles until the Polaris Gala on September 19.
Of the nominees, Stylus readers should recognize Miracle Fortress and Colin Stetson from this month’s issue, and Arcade Fire, PS I Love You, Diamond Rings, the Rural Alberta Advantage, Braids, and Women from previous print issues. There’s also a number of weirdo records that the Stylus crew has been talking about this year that are on the list, like Destroyer, Dirty Beaches, Tim Hecker, Little Scream, The Luyas, Timber Timbre, and Young Galaxy. Not to mention there’s been the inclusion of the indie-ubiquitous Buck 65, Black Mountain, Stars, and Sloan.
The rest of these albums should make a bit of a splash over the next couple weeks, but they’re from somewhere in Canada, and someone nominated them—so do check them out!
In all consideration, my money’s already on Braids’ Native Speaker, if the award isn’t preemptively  surrendered to Arcade Fire (who have already had world-charting success and a number of awards) in the next couple days.
List is after the jump. END_OF_DOCUMENT_TOKEN_TO_BE_REPLACED

If it seems as though Montreal is churning out hipster rock like it’s going out of style, it’s probably because it is. Between Arcade Fire (who recently had the highly coveted musician slot on Saturday Night Live), the Dears, the Unicorns and the Stills, Montreal has taken over as Canada’s indie rock capital. The city can now add a Polaris-prize winning band to its list of accomplished musicians – Francophone quintet Karkwa won Canada’s highest musical honour, along with a cool $20,000, this past September against some major heavyweights including Shad, Broken Social Scene, Radio Radio and The Besnard Lakes.
“Montreal is a great community, there are a lot of dedicated fans and a great group of musicians that we are friends with,” says Karkwa vocalist and guitarist Louis-Jean Cormier. “The music comes very naturally, we’re influenced by many things, the weather, maybe even the winters; there is definitely a ‘Montreal’ sound.”
To make their Polaris win for their fourth album, Les Chemins De Verre, that much sweeter, they also managed to be the first Francophone act to take home the popular prize. “All the newspapers in Quebec and Montreal were talking about it, we were surprised just to make the short list and to be a part of it with many bands that we listen to and are fans of,” says Cormier. “We were so surprised to win, it was unbelievable, we had no expectations. But when we won, we had to speak in English in front of all those artists – that was pretty strange.”
END_OF_DOCUMENT_TOKEN_TO_BE_REPLACED