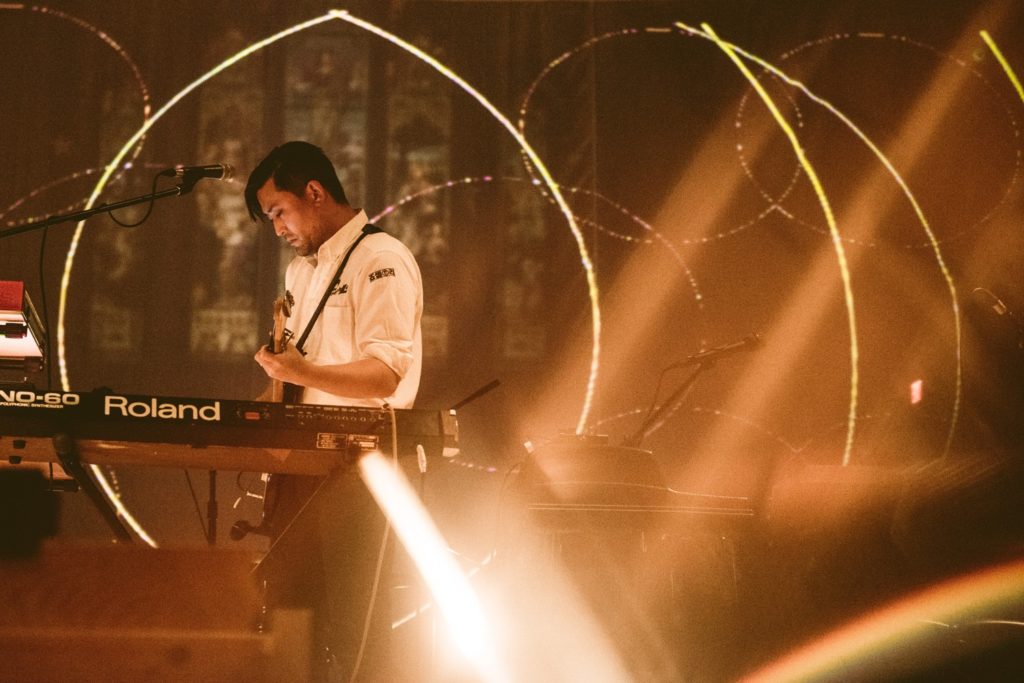 Another successful Real Love Thursday was executed on April 5th, when Adam Fuhr and The Pinc Lincolns performed alongside the one man ambiance ensemble Holy Hum. The music was housed at the Handsome Daughter. Even before the show, the mise en scéne onstage gave a cozy thawing feeling on this slightly below 0 evening.Winnipeg band Yes We Mystic usually perform unique songs with high energy and emotion. Tonight, the band’s lead singer Adam Fuhr provided no less energy on his own, performing intensifying songs with atmospheric guitars, keyboards, and synthesizers.

Surrounded by lamps and keyboards with a guitar strapped around his back, Adam sat on a stickered suitcase providing brand new takes on his band’s well known tracks like “Odessa Steps”, as well as a playful cover of Justin Bieber’s “Baby” – including the Ludacris rap verse, after which Adam announced, “For the record… LUDA.”

Adam Fuhr’s vocal performances always exude intensity and evoke emotion, and tonight he showed that he can expertly structure and restructure a song, as his arrangements were simply beautiful. This fresh performance was absolutely one to remember.

Following up was Andrew Lee, also known as Holy Hum. As a touring performance musician, Lee showed that he could captivate a crowd just by standing at his keyboard rack with the spotlight on him. The sounds were not just for audio aesthetic; each new tone had feeling behind it, making this performance particularly emotional.

The long synth breaks and riffs may seem indulgent, but they were indulgent for the audience as well. Each delicious segment of the song was well timed and acutely placed with intent. When Lee’s vocals soared with reverberation over the already floaty analog audio, we felt the story even more than we heard it.

With gentle theme changes in the performance, the audience was taken on a journey through Holy Hum’s mind, each destination more and more intense. After the final song, which was filled with both soft and cutting synth sounds, driven by 808 beats, Lee gently closed his laptop and left the dark stage.

When the Pinc Lincolns took the stage, the night completely changed direction – from ambient intensity, to traditional four piece rock n roll. With a heavily distorted bass, the songs pushed forward their relaxed sensibility, kept in time by toms and minimal cymbals. Sharp organ tones were only out-cut by the low slicing vocals sneering out almost psychedelic lyrics.

The rotary organ filled in the gaps of well-placed riffs. Slightly reminiscent of Beady Eye, but more likely inspired by the Sheepdogs, the band was low-key yet enjoyable. The lead singer described their set as a bit of a workshop, but the communication was effective between each band member, as well as the listeners. Though there were slight technical difficulties, the group played through professionally, making up for any missed sound with cool jazzy keyboard riffs on the final song.

After the set was over, it was clear that each performance, though very diverse, left a lasting impression on the audience.