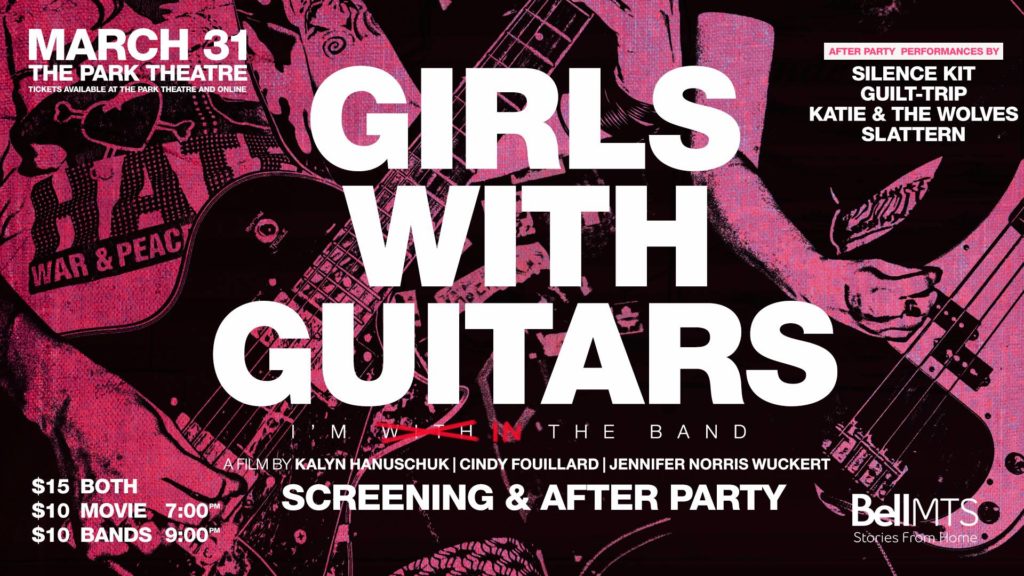 At least six years ago Kalyn had an idea to create a TV series about the inspiring and ambitious local girls of Winnipeg, who continuously impress the city with their stringed skills. Fast forward a bit and add Cindy and Jenny, change TV series to documentary, and throw an application in to MTS’ Stories From Home, and we have the beginning of Girls With Guitars. They weren’t expecting to, but they won the grant. Not that they didn’t believe in their idea, but validated by the inspiration of this project, Winnipeg is full of talented individuals who were also in the running to receive said grant. But it was Girls With Guitars time to shine and that they did.

Veterans of the music community, Jenny Norris Wuckert, Cindy Fouillard and Kalyn Hanuschuk, are the right people to put this story together. These women have no lack of musical background, having each played in multiple bands over the years and still do. Despite life’s potential obligations, these girls are consistent contributors to Winnipeg’s music scene. They sat down with me to hash out the details of this journey and what became of it.

Fast forward again another few years and we have a final product. But there was a pretty big “okay, now what” upon acceptance of the grant. Trial and error, gear troubleshooting, all those logistics equal stress. But the content of this documentary and the excitement to tell these stories, or to learn these stories, far outweighed those concerns. There was so much content to cover, so many personal stories to hear, so many perspectives to learn from. And now they’re ready to share what they’ve discovered with you.

“You’re pretty good for a girl… Oh please, just because you’re carrying your boyfriend’s gear doesn’t mean you aren’t paying cover… I didn’t expect you to sound like that!” It’s true, there’s a lot of women raging in the punk/grunge/rock scenes in Winnipeg and they are widely appreciated by many musicians and show goers. But good luck finding one who hasn’t heard one of the above lines. It’s unfortunately cliché and these clichés hinder the growth of women musicians. Because the positivity and the supportive members of the community aren’t always apparent when you haven’t had the chance to experience them first hand. And so a lot of wasted opportunities pass by, because people don’t always want to start a hobby trying to prove themselves.

All the women hear the same bullshit, but they don’t all react the same way. Some get mad, some fight it, some pass it off as non-existent. However they handle it is fine, so long as they keep rocking. Girls With Guitars will give you some of that insight so you can find out just how your favourite local ladies aren’t letting it get to them. They’ll validate your concerns all the while telling you why you don’t need to succumb to them.

You can expect bits from local musicians Alana Mercer, Joanne Rodriguez, Julia Ryckman, Amanda Sousa, Jenna Priestner, Jennifer Alexander, Pam Mackenzie, and of course Jenny Norris Wuckert, Kalyn Hanuschuk, and Cindy Fouillard. That’s a minimum of ten perspectives to inspire you. That’s a minimum of ten lifetimes of experience to tell you. This isn’t just a story of girls who rock, it’s a demonstration of perseverance, a display of independence, and a reminder that sound has no gender.

So women who want to play, if you’re thinking it, chances are others thought it too. But they did it anyway, and you can too. It’s worth it, give it a shot. Go watch this movie, find some inspiration, and make some new friends.

Girls With Guitars isn’t supposed to be one big fuck you! The filmmakers behind this project set out to deliver a positive message. Go say hi after you’ve seen it, open a discussion, and most of all have a good time.

It’s going to be badass and it’s going to make you hometown proud. Check out the screening at The Park Theatre on March 31st, followed by a live show featuring Silence Kit, Guilt-Trip, Katie & the Wolves, and Slattern. Then continue to watch it on TV on MTS. The whole event is all ages so let everyone benefit from this party or inspiration.