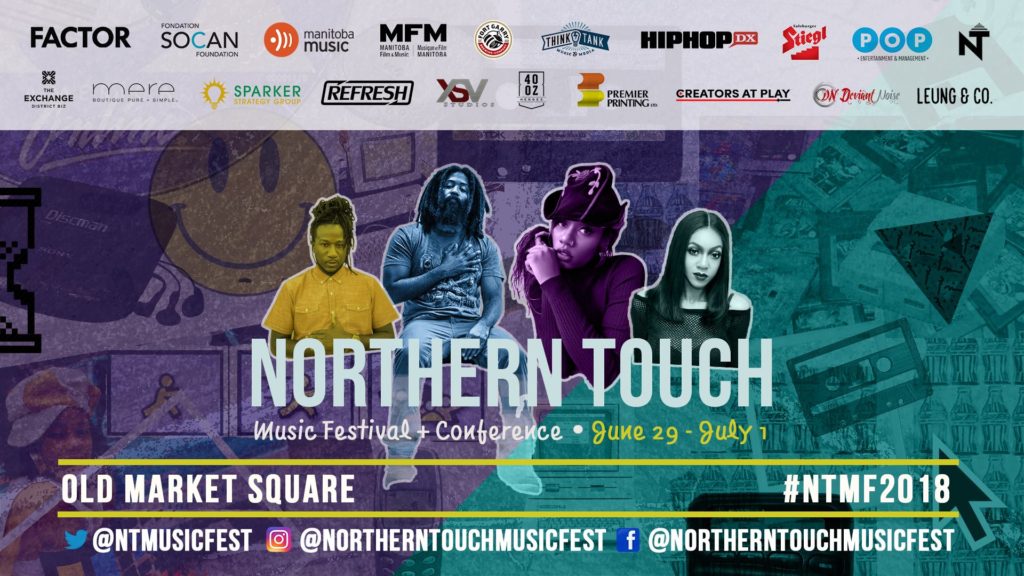 Northern Touch Music Festival enters their sophomore year in 2018 expanded and with results on the promise of furthering local hip-hop, R&B and soul acts. The festival, taking place June 29 to July 1, draws their name and inspiration from a touchstone song in Canadian hip-hop. “Northern Touch” by Rascalz featuring Kardinal Offishall, Choclair, CheckMate and Thrust was an important record when released in 1999.

Bringing together rappers from Vancouver and Toronto, the song won a Juno and at the most recent Juno’s the songs creators performed an impromptu A cappella version. Almost twenty years on and the founders of Winnipeg’s Northern Touch Music Festival are using the song as a message and a reference point.  The name acknowledges and pays tribute to the past, showing young hip-hop artists that knowing your history is necessary.

The festival was co-founded by Shea Malcolmson, a local hip-hop artist who performs under the name Abstract Artform. Malcolmson has been active in local hip-hop for over a decade and says that the inspiration for the festival “came out of the struggles [he] faced as an artist.” Having performed at festivals across North America, including New Music Week in Toronto and SXSW in Austin, Malcolmson saw a noticeable gap in the representation of hip-hop. In early 2017, Malcolmson began to see the stars align for starting a hip-hop, R&B and soul festival in Winnipeg. The catalyst was a meeting held at Manitoba Music. The local music industry organization has long done good work for local roots and rock acts but began receiving push back that it was not serving the hip-hop community in any meaningful way.

The March 2017 meeting was attended by around seventy people. Inspired by the turnout and with a grant from the federal government, Malcolmson quickly organized the initial Northern Touch Music Festival in just three months. Originally a largely solo effort by Malcolmson, the festival has become a non-profit organization with an impressive and diverse board of directors. The president of the board is DJ Bunny, a legend in the Winnipeg hip-hop scene and Abstract Artform’s first DJ. Malcolmson called it an easy decision to involve DJ Bunny, because he “wanted to find the roots of Canadian and especially Winnipeg hip-hop” and that DJ Bunny is “the archetype of what the perfect hip-hop person is.” Bunny started as a DJ in the earliest days of Winnipeg hip-hop in the 1980’s and he collaborated on Western Canada’s first hip-hop music video in 1988.

In every way Shea Malcolmson is trying to educate about the history of hip-hop in Canada, not only for the up and coming artists performing at the festival but also the casual fans of the increasingly popular genre. Malcolmson points back to the name he chose for the festival, calling the song Northern Touch “the theme for resilience in hip-hop.” In the intervening years since the songs release, Canadian hip-hop has had peaks and valleys and while Canada and Toronto especially have produced massive names lately, Malcolmson is quick to point out “until Drake we had to push really, really hard.”

With a sanctioned nod from members of Rascalz for the use of the name, Malcolmson makes is clear that “education is going to be a huge portion” of the festival. Calling NTMF a “professional development based festival” this year will feature a multitude of panels, workshops and seminars aimed at furthering artists careers as well as demonstrating all four pillars of hip-hop to the public at the free outdoor stage at the Cube in Old Market Square.

Simultaneous, open to the public break dancing battles; scratching demonstrations, graffiti art showcases and beat-boxing competitions will all be taking place while some of Winnipeg’s best acts rock the Cube. The diverse programming is intended to draw in every level of fan from diehards to curious onlookers with the hope that all will leave having experienced something new.

While the inaugural NTMF was hastily assembled, Malcolmson has spent 2018 working hard for the artists who performed the first year. In May, Northern Touch had a featured showcase at the New Skool Rules Festival in Rotterdam, Netherlands. Acts from last year including Chris Bennett and Malcolm Jay performed at the showcase alongside other Winnipeg groups like 3Peat. Malcolmson sees taking locals acts abroad as an important step towards increasing the flow of “money to marginalized music and by extension to the communities that make that music.”

Often Winnipeg is criticized as being too isolated but Shea Malcolmson views it as a plus for hip-hop. He sees the scrappy, bottom up nature of hip-hop as being reflected in Winnipeg as a city. Hip-hop, like Winnipeg, has traditionally been dismissed and as Malcolmson explains, “our values are underserved, marginalized, nobody ever really listens to us,” a sentiment many Winnipeggers identify with.

Malcolmson admits he has no plans on moving the festival to larger centre, noting that his angle wouldn’t work in bigger cities like Toronto. When pressed on whether Winnipeg was the right choice, Malcolmson points to SXSW. The Austin, Texas based festival received similar comments when it began but has grown to become the largest music conference in North America. The internet has allowed more connectivity among artists but Malcolmson reminds that when it comes to Winnipeg “the people make it what it is.”