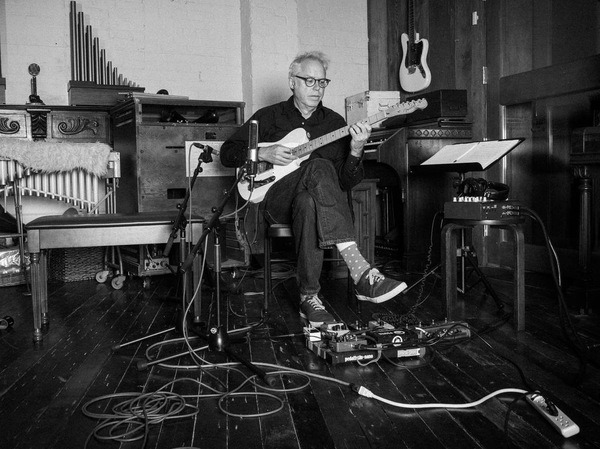 Bill Frisell. Perhaps you’ve heard the name before. And yet there’s just as good a chance that you haven’t. For the past 35 years or so, Frisell has been quietly building a legendary career for himself. He has collaborated with an increasingly diverse roster of artists, including Norah Jones, Emmylou Harris, and Paul Simon (to name but a few). In recent years, his music has been described as hearkening back to classic Americana. And while it is true that he has dived headlong, at times, into folk and country music, he is still a jazz guitarist at heart.

Born in Baltimore, Maryland, in 1951, Frisell began his musical education on the clarinet. Yet even as a small child, he was enthralled by the look and sound of the guitar. The story goes that he was first exposed to the guitar by watching Jimmie Dodd on The Mickey Mouse Club (on the show, Dodd would sing and play original songs on his famed “Mouse-guitar”). By his mid-teens, Frisell picked up the guitar and never looked back. As a child of the 1950s and 60s, he was initially enamoured of rock and roll, listening and playing along to music of the Beatles and the Beach Boys: bands he still cites as major influences (see 2011’s All We Are Saying… and 2014’s Guitar in the Space Age).

Frisell finally broke into the jazz scene in the early 80s, his signature otherworldly guitar tone already firmly established. At that time, he became the “house” guitarist for the ECM label after Pat Metheny famously recommended him for a gig. It was there that he recorded for the first time with such visionaries as drummer Paul Motian, and saxophonist Jan Garbarek. These initial encounters led to enduring gigs with Motian in particular, as well as a celebrated early 90s trio with Kermit Driscoll on bass and Joey Baron on drums.

The late 90s and early 2000s brought an increasing awareness of folk and country into Frisell’s already expansive musical vocabulary; a tendency to write for and record with some fairly odd musical configurations; as well as a number of commissions to write music for film and other media.

His is a soft-spoken, humble approach to life and music that belies his status as a living legend. When introduced in interviews as said legend, he will often come back with a response like, “Hey, we’re all in this together.” It is this nature of humility that has most endeared him, and his music, to me.

Growing up, I had heard Frisell’s name floating around for a number of years (I vaguely knew him as a jazz musician), but I did not become fully cognizant of Frisell as an artist until I heard his 2013 effort Big Sur, essentially an album-length suite of music commissioned by the Monterey Jazz Festival, and scored for the unlikely ensemble of guitar, violin, viola, cello, and drums. Quite literally, from the first chord of its opening track, “The Music of Glen Deven Ranch,” I was hooked. This was also the moment I discovered Frisell as a composer. Here was over an hour’s worth of original compositions that, on first listen, took me to a place of unexpected comfort, as if I had been familiar with the music my whole life. But, of course, it was wholly new, beautiful, and haunting.

This led, inevitably, to an enthusiastic search for more of his music. The sparse and dreamlike Disfarmer (2009), another commissioned piece, plays itself out like a rock opera (without lyrics, of course). It takes as its subject the life and work of a reclusive photographer from the American South, and employs a pedal steel guitar, exuding a moody country twang throughout. Next in my search came the equally sparse Beautiful Dreamers (2010), which pairs Frisell with Eyvind Kang on viola and Rudy Royston on drums. Sure, all this music might have been described as “Americana,” but to me it felt much deeper, more personal, and far less “categorizable” than that.

Admittedly, being a fairly new fan, my knowledge of Frisell’s music has been limited primarily to albums recorded since 1999. This does not even begin to take into account the many albums he has recorded as a sideman. However, thanks to websites like Youtube and Spotify, I have been able to get a better glimpse into his early career (even pre-1982, the year he supposedly “broke out”).

All this is to say that this October, your friendly neighbourhood Cinematheque will be showing a documentary (made last year) on Bill Frisell and his music, complete with interviews from many of Bill’s contemporaries, which will serve to shed more light on his life and music than this short article has accomplished. Check out Cinematheque’s website for showtimes. Perhaps I’ll see you there!