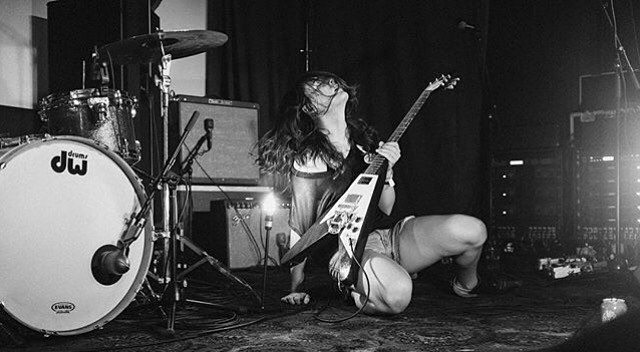 Creating intimacy at a live performance can seem like an impossible thing. There is this very distinct separation between the musician(s) on the stage and everyone else on the ground below them. The space where the audience members are is very dark so the musician(s) can’t see them; meanwhile, the musician(s) are lit up with intense fluorescent lights illuminating every single one of their features and even, flaws.It can feel like a very separated experience being at a show, the musician is above you almost on a pedestal and you’re on the ground below them forced to look up at them through these heavy lights; it can be kind of unsettling. Cassia J.Hardy, creator of the musical project Wares does all she can to eliminate this dynamic of separation and instead tries to create an intimate connection at every live performance.

Being a solo musician you are able to control all of the dynamics while playing live, one of these dynamics being level of intimacy, and that’s one of the reasons Cassia enjoys playing solo sets so much. Cassia elaborates, “It’s easier with a solo act to bring more intimacy to a show, if you’re responsible for all the sound on the stage you can make it as quiet or as loud as you want. If you can control the dynamic you can turn your guitar to just a whisper volume level or you don’t really need a mic, you can just sing right to people; that’s how I really like to operate”

What Cassia does to create that connection is to ditch the bright fluorescent lights and bring her own. “Intimacy is a big part of my set so I ask for all of the lights in the house to be turned off and it’s just these four bulbs in each corner of the stage. It’s mostly for my comfort; it makes the room, it makes everything feel a lot closer even if it’s not. I have no problem playing big rooms or anything, that doesn’t make me nervous, it makes everybody in the room feel more involved.”

Intimacy isn’t just about turning off the lights though, intimacy is about feeling safe, if you don’t feel safe, you won’t be able to achieve that connection. Cassia realizes this and always makes sure that the venue Wares is playing at is a safe space and that everyone can feel included and safe, free from hate or discrimination. Cassia says that the performer on stage should be cognizant of how everyone is doing and what vibe the crowd is giving off and if you see or hear something bad to call it out.

It’s easy for Cassia to do all of this because Wares has in the past primarily been a solo project and she is the person making all of these decisions. “For the longest time my earliest records were bedroom recordings and for the longest time the idea of this project was it would just be my songs and me on stage performing so it would be portable in a way that a band isn’t and that’s gotten me this far.” But, Cassia has been thinking about adding more folks into this musical project. “Wares, as of just talking to you right now, it’s starting to expand. I’m entertaining the idea of involving other people in the level that I involve myself.”

One thing that Cassia finds difficult is how hard it can be when trying to organize a band and finding times that work for everyone’s schedule to practice and do shows, and organizing a group of people who have the same level of passion as you. In that way being solo is portable and very easy to organize but, when you’re solo you don’t get to have the same songwriting experience, and working with other musicians to write a song can be a very rewarding and introspective experience; you get to look at topics and issues through not only your musical lens but also through someone else’s.

Wares has started playing shows with more people. “We did a couple (shows) over the summer. We played Sled Island together, that was a really fun show, we opened for the band Cloud Nothings.” Wares is still continuing to grow and will be going on tour as a band October 11th and will be at the Good Will Social Club on October 22nd.

Cassia proves that you don’t have to keep doing the same thing just because that’s what you started doing at the beginning of your career and that you are allowed to add more or less people into your projects. If it’s your project, you have full control but it is always a good experience to work with like-minded people and be able to collaborate creative thoughts.

You should try both before sticking to one, and never stop doing what you are passionate about. Whether Cassia is playing with a band or by herself, she won’t ever stop making music. “I see myself making music and being creative musically for my whole life. Whether or not I am doing the band thing or criss crossing the globe and really pushing records or whatever, remains to be seen but I’ll never stop writing songs.”