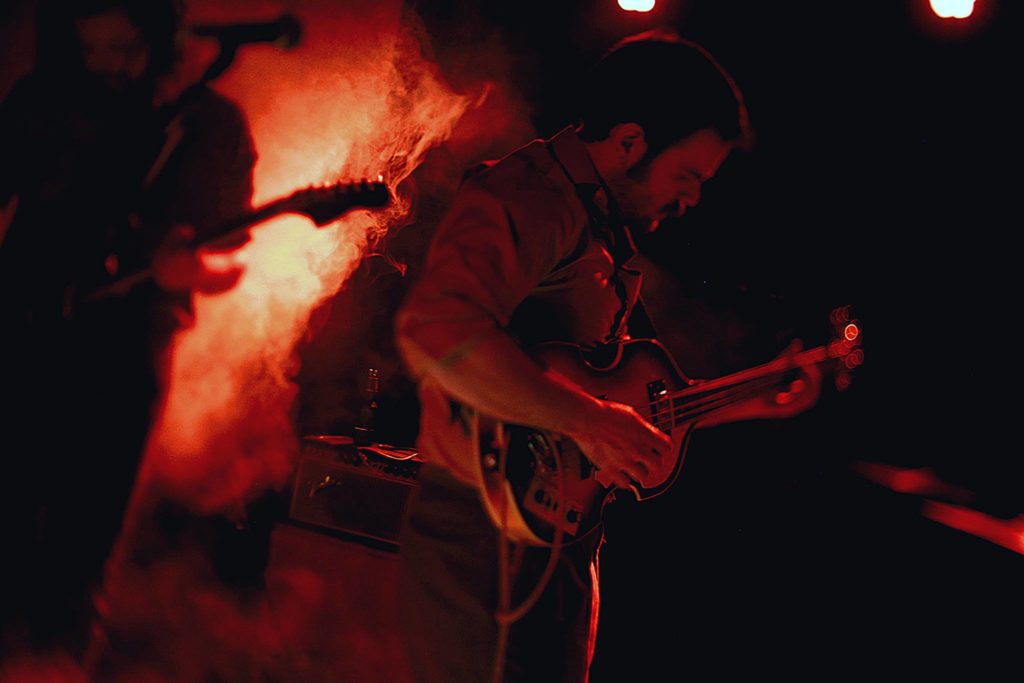 The cold wind subsided and soothed the air in Winnipeg on the evening of February 17, but the weather wasn’t the only thing warming up. Brady Allard’s new project, Warming, played their first set on that Saturday evening. The lineup at the Handsome Daughter included two other groups: SOUP and Dana Lee. Each group brought fresh new music to the audience, which left us excited to see what was next to come.The first group to play was led by Dana Lee. The ensemble included Lee on guitar and vocals, a backup vocalist, lead guitar, bass, and drums. The initial songs were upbeat and accompanied by a slide guitar, shifting their sound toward a more alternative-country style. After a few songs, Lee warned the crowd playfully: “We’re gonna play some sad songs too!”

With floating bass lines and picked jazz guitar chords, Lee’s band introduced new concepts and musical ideas to the audience. The set was pleasantly dynamic – moods shifted as Lee performed a barebones section of the set on her own. The full band joined in again at the perfect moment. Although the set was lengthy, it had a cooperative flow to it. Each song had a methodical structure and varying melodic vocal lines.

Dancing along with the band members until the set ended, the audience was in for a treat from the next band. Amos Nadlersmith (AKA the Shoal Lake Kid) performed his crooning folk songs with a band for the first time ever.

Dubbed SOUP, the group presented a new take on some great songs. Personally, I’ve enjoyed melancholic yet hopeful music from the Shoal Lake Kid for a while, and I was extremely excited to hear that they would be performed with a full band.

This set was short and very sweet. Each song was well converted to be suited to a full band. Lead guitars shined softly over the main guitar and vocals and gently took the audience on a dream ride to ecstasy when it was time for a solo. The full band version of “Alright” was slow and gentle, soothing the audience yet putting them on the edge of their seat for what they were to hear.

The final song, “Jesus Cocaine Ketamine Christ” rocked through the verses and broke down on the chorus. The catchy name of the song was sang in three part harmony, while the drums played on just the downbeats. With simple and beautiful guitar tones and lyrics that could make anyone choke up, SOUP’s first set was a complete success.

I spoke to Amos after the show to ask how it felt playing with a full band. “It felt pretty cool bringing a full sound to songs that I’ve been jamming by myself for a while now. It was also a lot of fun. I love Sam Adam and Brian a lot so getting to play with some of your best pals ain’t that bad.”

The Shoal Lake Kid hopes the audience members who had seen his solo set felt the heightened energy that he felt while SOUP played. I definitely did.

No set plans are made so far for SOUP, but Amos hopes to play more shows with the group. “Adam and Sam tour with their bands Living Hour and Veneer often so Soup shows will kind of have to fit around the already busy projects of the mates.”

SOUP plans on playing together again, and I plan on seeing them when they do.

Finally, Brady Allard and Warming took the stage. With Allard on a Beatles-esq bass guitar, he felt like a modern McCartney. Synthesizers and clavinet tones topped light guitar playing while the punchy vocal tones surprised those in the audience who were new to Allard’s music.

The big moments (and I mean BIG) seemed so effortless — high vocals soared seamlessly over bass driven acid rock riffs. Fresh drumming styles drove each song forward. Warming’s authenticity and originality drew in the audience and blew their minds with every turn and every hook.

Once the fog machine was activated, the milky vision vibes got even more real. The final few songs were a roller coaster ride through the fog. Rapid tempo bass and drums backed up wild a wild guitar part, while Allard shouted his poetic lyrics at the top of his voice. After a big finish to what seemed like it would be the final song, the band breathed for a moment, and without leaving the stage, began what felt like an encore. As this final song played, I couldn’t help think “How are they going to top that last song?”

Allard finished singing, but the band played on. He put down his bass and walked quickly off stage. While the rest of the band finished playing, the crowd was left in awe.

The last of three great performances left the audience cheering and satisfied. Warming had left a warm feeling inside each member for the cold nights to come.