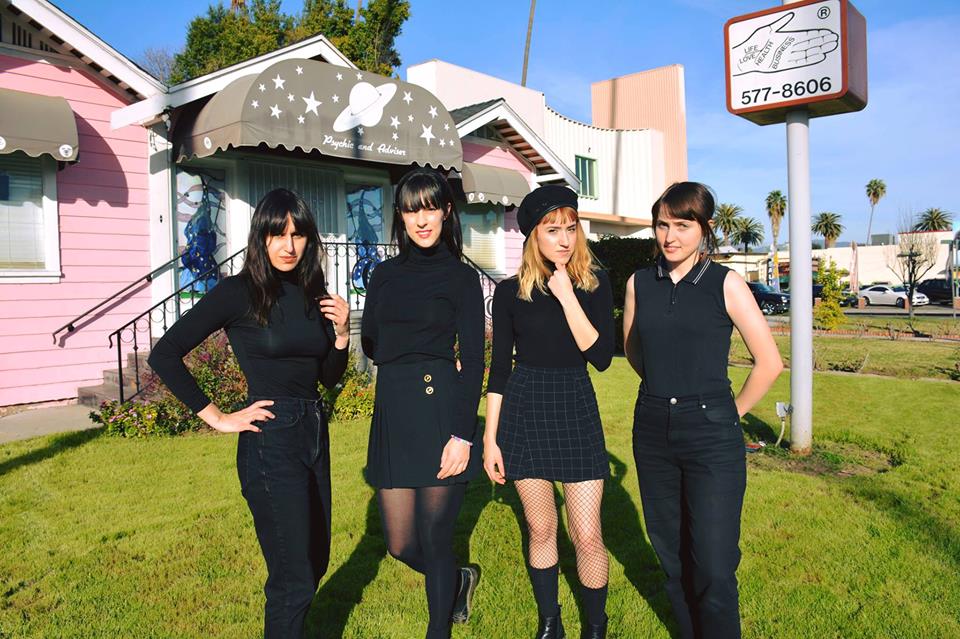 Originally hailing from Ottawa, Peach Kelli Pop is a LA-based band that specializes in beachy punk music filled with loud guitars and infectious melodies that captivate the heart and soul. Founded by songwriter and multi-instrumentalist Allie Hanlon, the band has made waves not only in Canada and the US, but overseas as well, particularly in Tokyo, Japan, where the band has toured many times.

Zoë LeBrun: You have a show here in Winnipeg at the Handsome Daughter on June 20th, are you excited to be touring back in Canada soon?

Allie Hanlon: Yeah, really excited! This tour we’re actually playing a couple new cities that I’ve never even been to in Canada, so it’s something I’m excited about and I feel like it’s long overdue that I’m doing a few consecutive dates in Canada.

ZL: What can audience members expect from a Peach Kelli Pop show?

AH: We always aim to have a high energy, engaging show. I think as someone that has a short attention span, I always want to cater to people who are similar to me in that way. I always want to perform with a lot of energy and make it really fun for the audience.

ZL: To give our readers a bit of context, how and when did Peach Kelli Pop come into being?

AH: I was living in Ottawa and playing drums in a few bands; the one that was most active was called The White Wires, and I was inspired to try writing my own songs because as a drummer, I was kind of just adding drums to songs that the guitar player and singer would write, which was cool, but I was like hey, maybe I can do this too! I ended up teaching myself really basic guitar and bass guitar and started composing songs in programs on my computer. So, Peach Kelli Pop started as a songwriting experiment, I guess, and it ended up growing into an actual band! That was in 2009, so there’s lots that’s happened since then.

ZL: Was the name for the band inspired at all by the song “Peach Kelli Pop” by Redd Kross?

AH: Yes, it was! Almost no one knows, and everyone thinks that it’s someone’s name, Kelli. Usually people call me Kelli and it’s like, alright, I can be Kelli, that’s fine, but yeah, that’s exactly right! They [Redd Kross] are a band from LA and all of the girls that play in Peach Kelli Pop actually really love them. They’ve been around for decades and they’ve gone through a lot of changes in terms of the genre of music that they play. I they started off as a super bratty punk band and then they ended up having a glam rock phase, and now it’s kind of alternative rock. They’re awesome! We’re actually friends with them and the singer’s daughter lives in LA. She’s super cool and has a band called The Side Eyes, so they’re around and it’s cool because I’m kind of star struck because I’m a fan, but they’re also just really nice people.

ZL: Your music gives me super awesome beach party vibes but maintains an emotionally honest and punk edge; what has influenced and inspired your sound over the years?

AH: I feel like pretty much everyone has a lot of different facets to their emotions and the way they feel, and so I feel like sometimes I’m inspired by being excited, or being really into someone, or being angry even; I think a little bit of everything shows up in the songwriting. Also, as I mentioned, I prioritize having an exciting live show, so I think that’s also why the songs, especially the songs that we choose to play live, are usually fast-paced and high energy, so I’d say I’m inspired by the range of emotions that we all deal with.

ZL: What is a snapshot of the creative process like for you when songwriting?

AH: That’s a good question, I wish there was one way that I did it, but I feel like every song has its own process and journey. It’s kind of frustrating, because I wish that I knew how I could successfully write a song in a day. I would be like, well I’m going to write an album, so this is what I have to do, but inspiration always comes at unexpected times. Sometimes I’ll be in the shower, just humming and I’ll be like oh, that’s a cool vocal melody, I’m going to remember that; but usually I just mess around on the guitar and record it onto my phone, so I have a bank of voice memos filled with guitar lines and I go back to them later to see if any might make a cool song.

ZL: Your album Which Witch just came out recently, right?

AH: Yeah! It came out on April 21st on Mint Records; it’s a 6-song EP and the songs are all really short, so they fit onto a 7-inch record. They’re all about a minute long, which is kind of crazy; you can listen to the whole EP in under ten minutes!

ZL: Nice, that’s super cool! I hear you have another album, Gentle Leader, coming out on May 25th as well! What are you most excited about for these album releases?

AH: When we put out Which Witch a few days ago we played at this really cool record store in Los Angeles called Permanent Records, and I haven’t ever played an in-store show with Peach Kelli Pop, so that was cool. It was like a daytime, totally sober, well-lit show, and it was really positive and fun! There was a lot of people crammed into this really, really small record store, so it was really fun to see everyone scrunched in there. There was a mosh pit, which was hilarious. Then, on the 25th, we’re releasing Gentle Leader, and the party is at a great venue in Los Angeles called The Hi Hat, and it’s our favourite venue because the sound is really great! As a performer, when you’re on stage and can hear everything really clearly, it helps you perform well. So that’s kind of dorky, but we all love to play there because we have fun on stage and we feel more confident cause we’re like, wow, this sounds great! When the sound is good on stage, you have more control over the quality of the performance, and our goal, obviously, is to make our performance sound as good as we can, so we are always really happy when we play there.

ZL: You also released a few music videos recently, out of all the filming processes for them, what was the best part?

AH: They were all pretty different! “Drugstore Symbol of Happiness” was a one-shot, slow motion video, and that was filmed really, really quickly, which was great, because I just showed up, played my guitar, sang into the camera, and then it was done! That one turned out really beautiful. It was just filmed against the sunset with downtown LA in the background, and I am a really big fan of simplicity, so I thought that video turned out really well. The other video that I love is “Los Angeles”, and I worked with three guys that do comedy in LA, they’re called Power Violence, and I think the video turned out really funny! It almost reads like a weird dream… like a dream that kind of makes sense on one level, but in a logical way doesn’t really make sense. It was great because normally we star in the music videos, but I feel like it’s a lot better when you get actual actors or people who can act well in general. I really want to go that route in the future more because I’m not a good actor, so getting someone that’s hilarious and who’s talent lies in acting is a great thing. Maybe people want to see the band, but for me, I really enjoy hiring someone who’s hilarious and has acting experience.

AH: I feel like it’s the ultimate payoff for all of your hard work because you get to meet people that really appreciate your music, and that is just such a great feeling. That, I would say, is the number one thing, and then travelling is really fun too. You get to see different parts of the world, or the country, and it’s so much fun. I also always love trying local cuisine! Touring can be really hard, but it’s always worth it.

ZL: Do you have a favourite tour moment or musical experience from your career?

AH: I feel like going to Japan for the first time was the most magical moment of my life, so I’d say that. When I came to Tokyo for the first time in 2014 I was in extreme culture shock, but I loved it so much. I was so overcome with joy and was like, this is where I need to be!

ZL: What are your hopes and dreams for Peach Kelli Pop?

AH: My hopes and dreams are that people enjoy the new music we put out and that we can continue to share music that we write, travel, and have positive experiences, because I feel very lucky to have them. I hope that people will continue to appreciate our music and come to our shows!