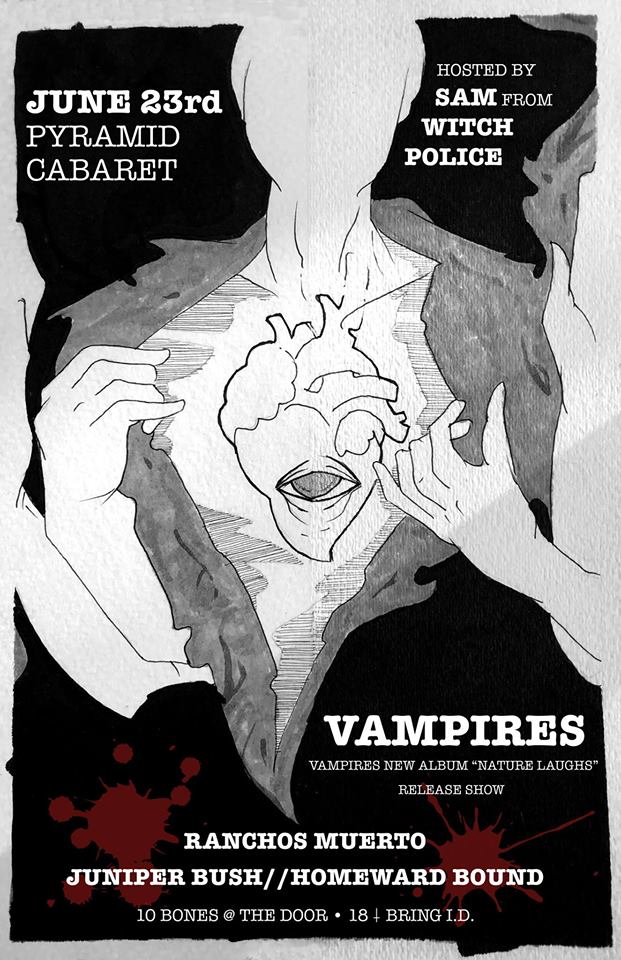 Over four years after the release of their Every Kind of Light EP, Vampires return with Nature Laughs, a refined development of their sound that furthers the duo’s fuzzed-out emotive thrust.

Nature Laughs showcases Vampires with a more tightened and dynamic sound, with songs made to dig deeper. It’s a bold new statement from a band that continues to dole out catchy rockin’ tunes packed with flurried hooks and propulsive riffs.

It opens with the overcast garage rock grit of “A Girl Named Trailer” that finds singer/guitarist David Dobbs’ noisy guitar and drummer Matthew Powers’ percussive push mix some punk and a little pop flavor for a raucous five-minute sprint. Instrumental “Osbourne Villain” then takes the reins veering through levels of fiery guitar and rapid-fire rhythms. “The Revenge” carries the instrumental torch, slowly growing, brooding and meditative, mood carried through tone over rising and rippling riffs that scale their way over battered drums towards a searing arched ascent. The song trails out on flickering notes and spare arrhythmic beats, unfurling with a post-rock sheen.

“Not Waiting,” a song that was included on 2014’s Every Kind of Light EP, follows the structure of the original but with an improvement in production that clarifies and enhances it. It starts out with a slow solemn sway that coils and winds into raw and noisy art-rock. Gnarly riffs and killer rhythms pummel their way into a jangly interlude before kicking back into buzzing riffs and swift blasts to the kit, making for one momentous ride.

“Riverview” finds Dobbs burrowing melodies within his guitar licks as Powers wraps hooks and grooves around them. Dobbs’ vocals go from speak-singing to frantic to soaring to screams; the song’s immediacy can be internally felt.

“Like You” opens spare and spacious and rises to anthemic pop proportions. The album closes with the melancholy alt-punk of “Winnipeg Song.” Also found on Every Kind of Light, but 20 seconds longer here, the song’s production gives it an added kick, filling it out in a way that hits harder than the original.

As an album that’s been in the works for a while and given time to fully be nurtured and formed, Nature Laughs is an excellent record that’s as suitable for summer’s warm days as it is it’s lonely nights. Whichever mood you’re in, Vampires will be there.

Vampires will be releasing Nature Laughs at The Pyramid Cabaret on Saturday (June 23) with support from Ranchos Muerto, Juniper Bush, and Homeward Bound.