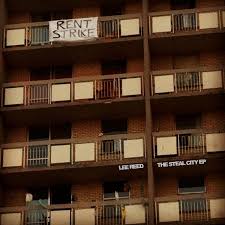 Veteran Hamilton based rapper Lee Reed has released one of the most relevant EP’s of the decade, The Steal City EP. Lee sets his sites on the gentrification of Hamilton which has recently been subsumed into the Toronto housing bubble.

While at times playful and sarcastic Lee also delivers lines with anger and defiance in tracks like “The Rents”, “fuck the high booster air farting love for art only so far as it sells homes\ fuck the motives of ownership\ all the new non-inclusionary zoning of it\fuck the rush to throw broke folks under the bus for motherfucking light transit\fuck the fake progressive stances that pave bike lanes over the working class”.

While the lyrical content is on fire, the production and beats are filled with catchy hooks that make this EP something you’ll have on repeat. Lee Reed performed live in Winnipeg on October 4th at the Windsor for a fundraiser for the Rooster Town blockade. All proceeds from the EP will go to the Hamilton Tenants Solidarity network.