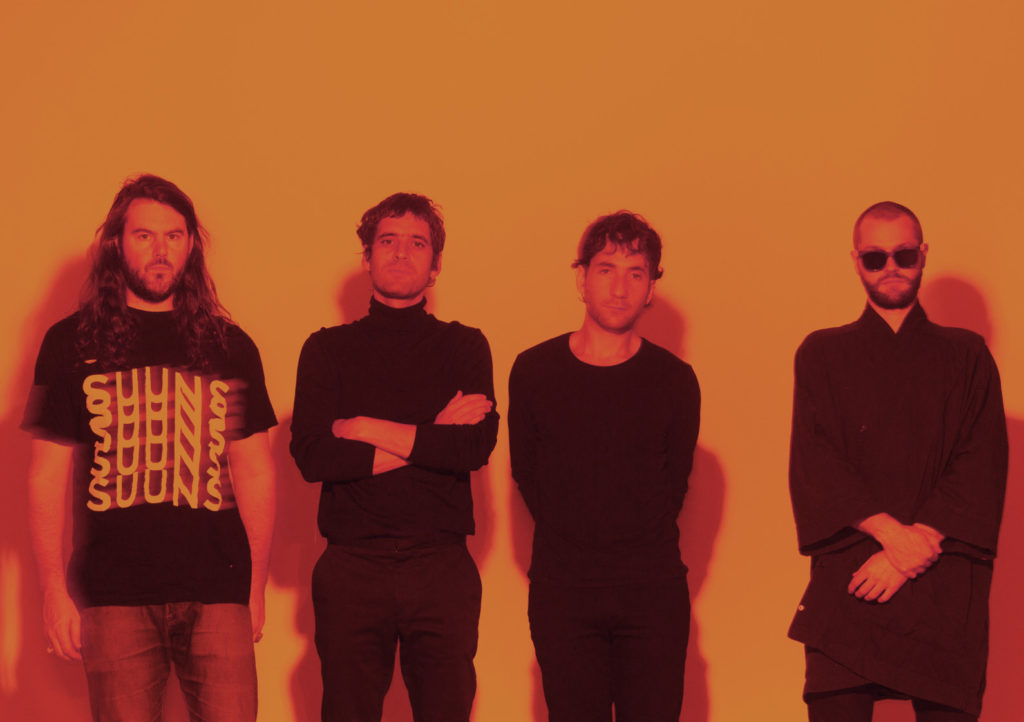 The subgenre of art rock is generally described as being music that involves challenging, avant-garde, unconventional, or experimental musical elements. By this definition, one could come to the conclusion that Suuns is practically the epitome of modern art rock. With the release of their LP Felt, recent music video for their song “Look No Further”, and upcoming Canadian tour on the way, we talked to guitarist Joe Yarmush, to find out more about this intriguing group.

The Montréal-based band began a little over a decade ago when Yarmush met Ben Shemie (vocals and guitar). Yarmush recounted, “Ben and I were at a party talking about Spiritualized, My Bloody Valentine, Gonzi, and bands like that, and we just hit it off and decided to maybe get together and play music once in a while. We did that off and on for, six months, maybe, and then we were ready to record with the band at point, that was back in 2007 . . . We got Liam [O’Neill, drummer] first, and then Max [Henry, bass] was friends with Liam, so the pieces just sort of fell together.”

Over the past years, the band has molded their sound into something completely unique from most other bands in Canada’s music scene, but that’s not to say that they themselves haven’t changed since the beginning of their careers as well. On the band’s evolution, Yarmush commented, “When we put out our first record, it was more rock-sounding, almost post-punk, a lot of angular guitars and stuff. The electronics were sort of in the backseat then, and it slowly morphed into more drum machines and synth-driven songs and melodies.”

Suuns has always been unafraid to push the boundaries of their music and go against the norm. “We’re still a niche sort of band, and that allows us to do a lot of things that if you’re more popular, you might feel pressured not to try,” Yarmush stated, “we’re just trying to push music for ourselves as far as we can take it. I guess in general, we’re just trying to approach it honestly and make something that challenges people a little bit. Not all the time, but there’s definitely an element of challenge through our music for sure.” Part of this challenge for listeners lies in the lack of immediacy when it comes to Suuns’ music. Yarmush added, “early on I think we were really inspired by punk bands and a do-it-yourself attitude, and now we’re in a different stage of our lives and just want something that’s more complex and not easily-deciphered upon first listening . . . it’s not an immediate positive reaction or like an overwhelming embrace of our band. I’ve been told it takes a few listens.”

The music videos that accompany Suuns’ songs are equally as distinctive as their music. Their recently released music video for the song “Look No Further” off of their latest album Felt presents a thought-provoking and almost eerie scene, with children discussing magic and the metaphysical. “Our drummer Liam was actually in charge of that one,” Yarmush mentioned, “his friend had made this film about kids in Cuba, so it’s actually just scenes from this short film that’s just cut together to our music by the director of the film… it’s not a video that was built from the ground-up, so I think that’s a first for our video catalogue.”

Suuns will be playing live shows until mid-December, with plans to possibly start another record in the new year. Yarmush disclosed, “there are no concrete plans, I couldn’t give you any specific details, but it seems to me that almost every January or two we start working on a new record, whether or not that happens quickly or slowly remains to be seen.” As of right now, the band is busy gearing up for their upcoming tour, which will also be making its way to Winnipeg this fall. “We haven’t played in Canada that much, to be honest, so this will be a nice turn of events”, Yarmush added, “I love the venue in Winnipeg, the Good Will, so I’m actually really excited to go back there.”

You can listen to or buy Suuns’ music on almost every platform imaginable; physical copies of their records can be bought at their live shows, ordered in at most record stores, and digital copies can be bought or listened to online!