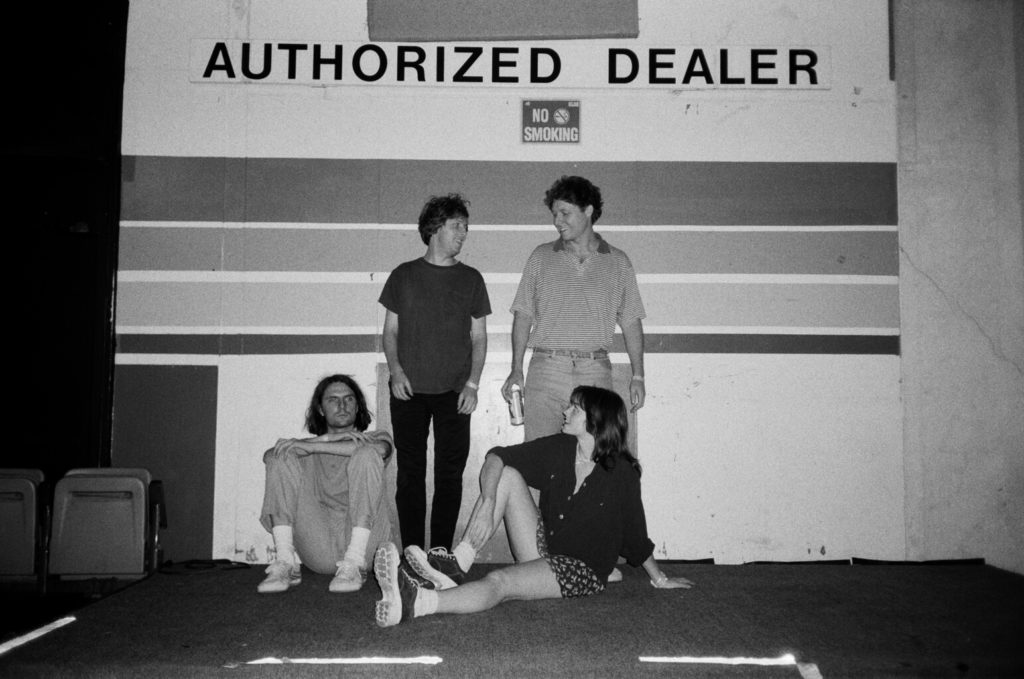 Not many bands can make music that moves with such elegance, ease, and bounce as TOPS. Surely this is no easy feat, as the band has been honing their formula over the course of three albums, plus another in progress. Last year’s Sugar at the Gate, TOPS’ third full-length, found the band pushing their soft indie rock a la mellow disco-funk into a further refined breezy luster.

Earlier in the year, Jane Penny, singer and keyboardist for TOPS, spent a couple months in Berlin. Since then she says she’s been thinking about spending more time there, and has been. The band was originally working on their new album in Montreal when unexpected circumstances made it so a couple of them had to move out of the home they were living and recording in. So after finishing up a tour in Europe, Penny decided to stick around in Berlin for a while. And it’s there that she and the rest of TOPS have continued to work on their next album. Speaking over Facetime Audio, Stylus chatted with Penny about what’s been in the works.

Penny explains how they’re “like a 5-piece band now with the writing and recording,” finding this to be one of the most exciting aspects of the new album so far.

“So we actually have been going into studios and doing stuff off the floor, which is really fun. And yeah I think that approach is going to have a pretty big impact on it,” says Penny. “Also just like we’re trying to do it in kind of a condensed fashion I would say. We’ve been trying to do it in a few months. Because everyone is kind of spread out like Riley (Fleck, drums) stayed in L.A. after we made our last record and stuff so we kind of all came together and we’re writing like a song a day and just kind of really slammin’ it out for awhile. Which is actually really fun and surprisingly I think a very productive way to do it, rather than spending months and months and months drawing it out.”

Talking about intent behind lyrics and what she chooses to put out into the world, Penny says that “I guess I feel it’s kind of like a lead by example of just being a positive, sincere, sensitive person, and then have the songs kind of be the same where people have something they can connect to. I feel like people connecting to each other is really important, so I guess that’s probably the main thing. I don’t know if I could take credit for doing anything beyond that really.”

Having played Real Love Summer Fest with TOPS in 2016, Penny seems to be looking forward to their return to headline this year. “We had a lot of fun there so that was a big part of why we wanted to do it when they offered this show because I remember it being a really nice atmosphere and really cool people and just like a good time,” remarks Penny. “I feel like these kind of forest fest things, especially like in Canada are really relaxing kind of like a getaway style of thing. You usually don’t have cell phone service. Everyone’s kind of in it together. It’s a nice vacation/show.”

When talking about how her perspectives have changed since being in TOPS, Penny says that “I guess one thing I’ve been thinking about lately is when I first started with music and maybe just being younger I always wanted to prove that I could do something or was always trying to get better, like practice, practice, I wanted to learn how to do this, that. And I still am trying to seek out knowledge but I’m kind of more relaxed about the way that I approach things and I’m feeling more and more like I’m just doing things for myself or that I like.”

“I guess maybe the more you do things the less you feel the need to show that you can do them. And that can be a freeing thing,” explains Penny. “But I don’t know if that has to do with music or just generally feeling more comfortable. But definitely I feel like TOPS, that people appreciate it gives you the confidence to not overthink things as much. And you can kind of just be more inspired and follow that kind of energy.”

Catch TOPS ending off Saturday night at the Real Love Summer Fest, sending their glittering warmth out to the festival goers and midnight sky.